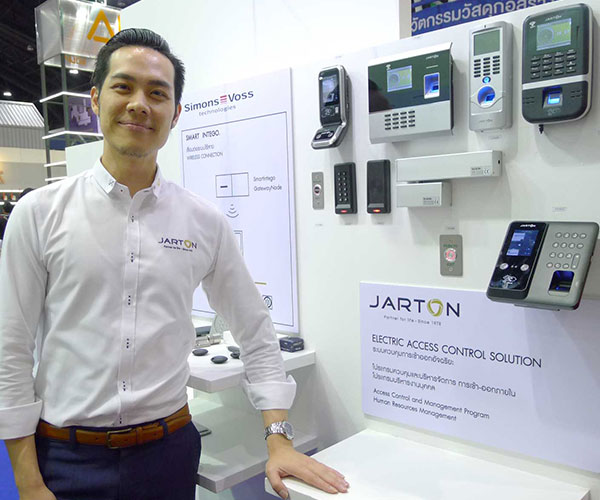 “Jarton Bot is a robot that specifically caters to the elderly.”

Though robots are thought to be mostly found in heavy industries or factories, one Thai company is determined to redesign AI robots for everyday home use.

With the Thai government announcing its Thailand 4.0 policy, an economic model focusing on new engines of growth to drive prosperity, Thai businesses are pushing innovation and technology to get ahead.

T-Tutt Jungkarnkul, Director of Jarton Group, shares his vision to develop more affordable robots and other technology for the home. Jarton Group manufactures aluminum and glass doors and windows, bathroom hardware for the elderly, digital door locks, and other smart living solutions, such as the company’s newly-launched Jarton Bot.

“Jarton Bot is a robot that specifically caters to the elderly. The robot is mobile and can move around a designated area provided there is a wireless signal, allowing the elderly to stay in touch with their family and communicate with them at any time,” says Jungkarnkul.

The company is working with government organisations to send the robot to 12 elderly care facilities across the country to ease depression and loneliness, symptoms found in approximately 10 to 20 percent of the elderly, especially those in nursing homes.

“I think of using the robots as a social enterprise or CSR whereby we can give back to society,” says Jungkarnkul. “To keep moving forward, we focus on finding solutions for our customers.

The global market has a great demand for robots now, but mostly for heavy industries. Jarton Bot is the first robot that is launched specifically for end users, with its affordable price. I want this innovation to be accessible for all. If people can communicate more easily, the gap between each other would lessen and we can really make an impact on people’s lives and the community at large.”

The company is developing the robot to be used for tele-conferencing, factory walk-throughs, or even put to work in areas hazardous for humans.

Other innovative products from Jarton include the digital door lock that can be controlled remotely from anywhere in the world. With businesses like AirBNB on the rise, this new technology allows users to generate and regenerate passcodes for homes and buildings as often as they like.

Jungkarnkul reveals that around 35% to 40% of company sales is international, with customers in CLMV countries now more open to innovation and more willing to try new technology.

“I think the most challenging thing about doing business is constantly learning new things. With more competitors in the market, teamwork is immensely important. To succeed, we need to focus on results and reach our goals as a team,” says Jungkarnkul.“I believe that doing business with Thai companies is a good opportunity for foreign buyers, the Thai touch and Thai heart cannot be duplicated.”