A Thai company is catching up with the booming trend in insects by offering a variety of new protein-rich food. 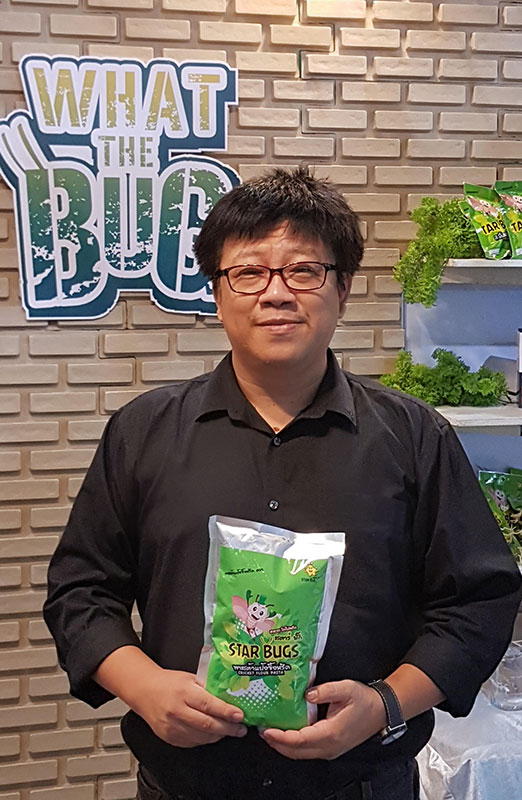 “Our key strengths are product varieties and completed supply chain.”

Thailand is a country with a long history of eating insects and, in recent years, the country has become an important base for insect farming and the insect processing industry. Several companies have debuted in this promising market, including Star Bugs Insect Food Product.

“My company entered this business by supplying paper egg trays to cricket farms, which are used to house crickets, as well as food to cricket farms. In 2016, we decided to buy mature crickets from our business partners to make fried crickets and sell them to domestic restaurants and pubs, and through our business partners,” explains Paijit Sangchai, founder of Star Bugs Insect Food Product, which also produces paper egg trays in Malaysia

“Several months later, we had another great business opportunity because foreign customers contacted the company and requested us to produce and supply them with cricket flour, which they used to make pasta,” he adds.

Although there is an increasing number of potential competitors both from Thai and international companies, Sangchai is confident that his company will remain competitive in the long run.

“My company has diversified its product lines and completed the supply chain from a contract farming partnership, to raw material production, own brand production, OEM production and distribution,” he says. “We can control the quality of the raw material and our production also benefits from economies of scale.”

The company has nine contract farming partners in several Thai provinces, including Chachoengsao, Suphan Buri, Nakhon Sawan, Udon Thani and Khon Kaen, as well as customers in the US and Europe.

Moreover, Sangchai believes that the insect-based food market will grow further since increasingly health-conscious consumers are turning to insect-based food for protein. This conforms to research by Global Market Insight, which forecasts the edible insect market size is set to surpass US$ 710 million by 2024.

“Westerners are getting to know the benefit of protein from insects, and we have to continue to educate consumers in order to widen this market. The insect-consumption market in Europe and the US is growing faster than in Asia,” Sangchai says. “At THAIFEX 2018, we met potential buyers from several markets such as Australia, Hong Kong, China and Japan.”

To capture the opportunity in this fast-growing market, Sangchai plans to add more product lines including porridge, cricket soup powder and cricket instant noodle, as well as extending the company’s customer base.